Costa Rica is top 10 Green Country in the World

Costa Rica is named the third best Green Country in the World, according to the recently released 2014 Global Green Economy Indexâ„¢ (GGEI).
The Global Green Economy Indexâ„¢ (GGEI) measures the green economic performance of 60 countries and 70 cities in the world with regard to leadership and climate change, efficiency sectors, markets and investment, and environment and natural capital. The GGEI also assesses the publicâ€™s perception of a nationâ€™s green performance. The fourth edition of the GGEI, published by Dual Citizen LLC, a private U.S.-based consultancy, was released at the end of October 2014.
In the Performance Rank, Sweden and Norway top the list, followed by Costa Rica in third place, and then Germany, Denmark, Switzerland, Austria, Finland, Iceland and Spain for the top 10. Germany leads the Perception Rank, followed by Denmark, Sweden, Norway, Netherlands, United States, Japan, UK, Finland and Switzerland; Costa Rica comes in at 14th place in this ranking. The Perception index is interesting given that Costa Rica ranks third in performance but 14th in perception; while China ranks 13th in perception and 55th in performance.
This is the first time that Costa Rica has been included in the ranking. 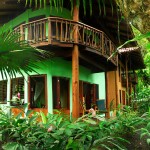 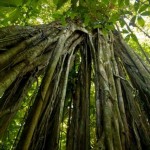 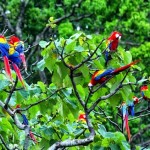 â€œCovered for the first time, Costa Rica records an impressive result, ranking third behind Sweden and Norway on performance and in the top 15 for perceptions overall, a notable accomplishment for such a small country,â€ states the GGEI. â€œCosta Ricaâ€™s overall top result on the performance measure is driven by impressive results on both the Efficiency Sectors and Environment and Natural Capital dimensions, making it one of only a few countries to achieve such strong results in both areas.â€
Costa Rica performs well most notably in tourism where it is the top ranked country in terms of performance on the five areas assessed by the GGEI, the report notes.
Green tourism, also called eco-tourism and sustainable travel, is what Playa Nicuesa Rainforest Lodge in Costa Rica is all about. The Costa Rica eco-lodge by the Osa Peninsula is one of only three dozen hotels in Costa Rica that have received the highest rating in the Certification for Sustainable Tourism Program (CST). Created by the Costa Rican Tourism Board (ICT), the CST program rates and certifies tourism businesses based on their compliance with natural, cultural and social resource management.
Playa Nicuesa Rainforest Lodge is located on a 165-acre private preserve in southern Costa Rica, bordered by the Piedras Blancas National Park and the pristine Golfo Dulce (Sweet Gulf), across from the Osa Peninsula. The region is a critical habitat for migrating Pacific Humpback Whales, hammerhead sharks, dolphins, sea turtles, Scarlet Macaws and jaguars.
The lodge is offering Green season specials through Dec. 15, 2014.
Article by Shannon Farley
Digital Presence Powered by Milestone Inc.
RENT THE WHOLE LODGE!Extra privacy at a special price. Learn more »
RENT THE WHOLE LODGE!Extra privacy at a special price.
floating book nowBook Now