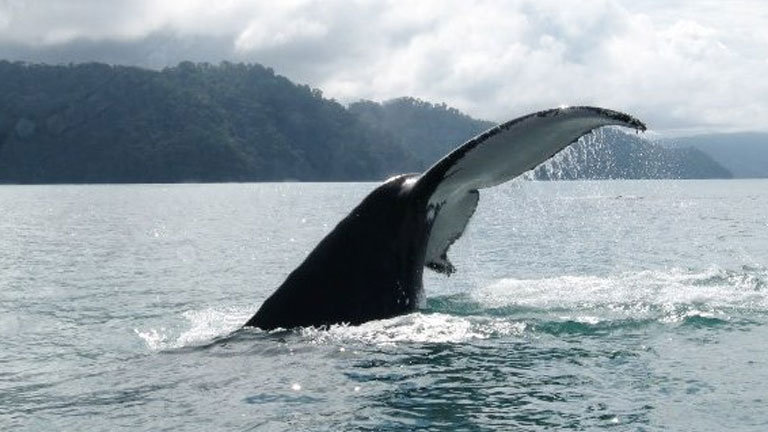 You can see an abundance of Costa Rica wildlife at Playa Nicuesa Rainforest Lodge. The remote Osa Peninsula region is special because it holds 2.5% of the biodiversity of the entire planet in less than a thousandth of a percent of its total surface area. Now is the time to see Pacific humpback whales as they arrive in the southern gulf of Golfo Dulce, by the Osa Peninsula, on their annual migration from July to October. The whales swim right past our beach, and Nicuesa Lodge's whale watching tours are some of the best wildlife tours in Costa Rica. We take you out on the calm gulf in our small boats, which allow us to be non-intrusive and respectful of marine life. One of the most pristine ocean habitats in Costa Rica, Golfo Dulce is considered a rare tropical fjord, one of only four in the world. Golfo Dulce is a crucial habitat for marine life, including endangered sea turtles, several kinds of dolphins, and migrating humpback whales which use the gulf to give birth, mate and socialize. It's humpback whale watching time in Golfo Dulce, Costa Rica! Photo by CEIC. 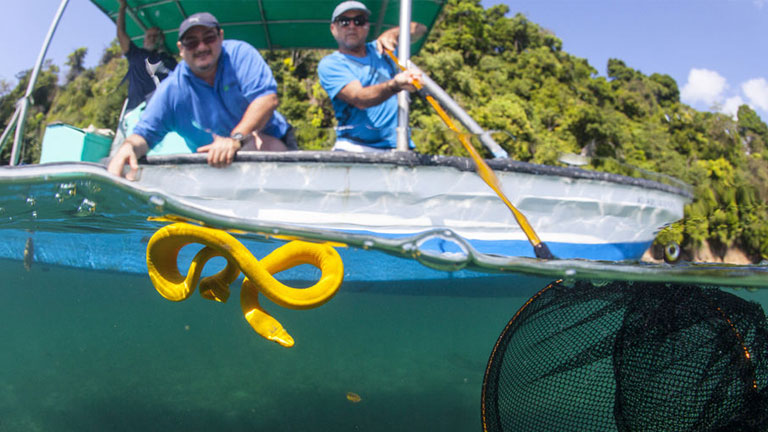 If that isn't exciting enough, a new animal species in Costa Rica recently has been reported in the gulf of Golfo Dulce. Biologists Alejandro Solórzano and Mahmood Sasa, of the University of Costa Rica (UCR), have been studying a particular sea snake in Golfo Dulce for five years, with logistical support provided by Nicuesa Lodge. U.S. researchers Brooke Bessesen and Gary Galbreath recently published their own study on the sea snake in the journal ZooKeys. They all propose the Golfo Dulce sea snake is a completely new species or at the very least, a distinct subspecies. Yellow Sea Snake in Costa Rica being captured by UCR biologists Mahmood Sasa & Alejandro Solorzano on Playa Nicuesa's boat. Photo courtesy of Pepe Manzanilla. Called a Yellow Sea Snake (Hydrophis platurus xanthos), to differentiate it from the commonly-known Yellow-bellied Sea Snake (Hydrophis platurus), this new species is completely golden yellow rather than the two-tone yellow and black. The Golfo Dulce species is smaller than the Yellow-bellied Sea Snake, which is found in the open Pacific Ocean from California to northern Peru. Costa Rican researchers say the Yellow Sea Snake evolved not needing the darker dorsal color of its cousin because Golfo Dulce's waters are about one degree warmer than the open ocean. When Costa Rican biologists Solórzano and Sasa come to Golfo Dulce to study the sea snake, Playa Nicuesa Rainforest Lodge supports their field work by providing accommodations and a boat and captain to conduct their research. The sea snakes are usually found out in the middle of the gulf and not close to shore.
Article by Shannon Farley
Digital Presence Powered by Milestone Inc.
RENT THE WHOLE LODGE!Extra privacy at a special price. Learn more »
RENT THE WHOLE LODGE!Extra privacy at a special price.
floating book nowBook Now