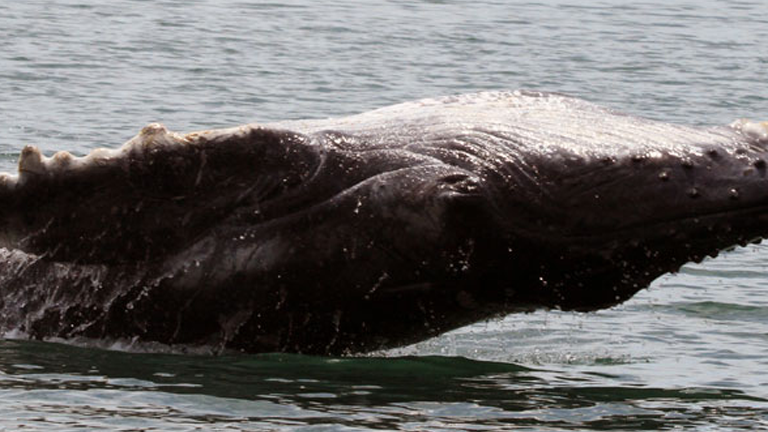 Just offshore Playa Nicuesa Rainforest Lodge in the warm waters of the Golfo Dulce in southern Costa Rica, Pacific humpback whales are about to arrive on their annual migration to mate, give birth and socialize from July to October.
[caption id="attachment_96" align="aligncenter" width="738"] Humpback whale breaching in Golfo Dulce, photo by Lenin Oviedo[/caption]
A real-life encounter with whales and dolphins in their natural environment is an unforgettable experience. There is a spine-tingling fascination about being in close proximity to giant intelligent beings sharing the planet with us, but inhabiting the mysterious watery depths where we as humans donâ€™t live. I
remember vividly the first time I saw a humpback whale in the wild. The special moment occurred in southern Costa Rica on the Pacific gulf of Golfo Dulce at Playa Nicuesa Rainforest Lodge. I was finishing 10 months of working at the Costa Rica eco-lodge as operations manager, and this quiet and sunny September afternoon was the final flourish to an extraordinary and life-altering experience of Costa Ricaâ€™s raw natural beauty.
[caption id="attachment_97" align="aligncenter" width="640"] Humpback Whale mother and baby in Golfo Dulce, Costa Rica[/caption]
I and some of the staff, along with the few guests staying with us at the end of tourist season, were standing on the concrete pier at the beach enjoying the beautiful afternoon. Suddenly, a spray of water erupted from the placid blue-green water a few hundred yards off the beach. The long, black and barnacled form of a mother humpback whale surfaced gracefully for air. Our little group pointed excitedly at the huge whale. Then we gasped in delight as we caught sight of the smaller shape of her baby swimming by her side.
We jumped into one of Nicuesa Lodgeâ€™s boats, and at a respectful distance, we cruised along with mother and baby as they slowly swam along the dark green coast thick with rainforest. Pairs of Scarlet Macaws flew overhead as sunset neared, heading to roost in tall shoreline trees for the night. The whales disappeared out of sight, and we motored back to Nicuesaâ€™s protected cove, thrilled and enchanted.
[caption id="attachment_98" align="aligncenter" width="640"]

Humpback Whale in Golfo Dulce, photo by Lenin Oviedo of CEIC[/caption]
Humpback whales in Costa Rica
After spending Southern Hemisphere summer feeding in the krill and plankton-rich icy Antarctic, Pacific humpback whales swim north in June to the Great Barrier Reef of Australia and as far as Costa Rica for its warm tropical waters to mate, give birth and socialize. From July to October, these southern whales hang out in the protected waters of the Golfo Dulce and the Ballena National Marine Park at the north end of the Osa Peninsula in Costa Rica.
Both areas offer shallow coastal waters and protection from natural predators like sharks and Orcas, and are important habitats vital to the endangered speciesâ€™ survival, according to the Center for Cetacean Research of Costa Rica (CEIC).
Plentiful sightings of these gentle giants of the sea prompted National Geographic to rate Costa Rica the 7th best place in the world for whale watching. Extravagant tail-slapping displays, breathtaking breaches through the water, and their distinctive hump rising above the waterâ€™s surface are the unforgettable sights everyone wants to experience on a Costa Rica whale-watching tour.
[caption id="attachment_99" align="aligncenter" width="699"] Humpback Whale breaching in Golfo Dulce, Costa Rica[/caption]
If seeing whales and dolphins up close in their natural environment is on your bucket list, you can go on Costa Rica whale-watching tours from Playa Nicuesa Rainforest Lodge starting toward the end of July through the end of September. Keep a look-out also for visiting whale sharks, the largest fish in the sea.
Nicuesa Lodge is giving a special offer of one free night when you stay a minimum of three or more nights; valid through Sept. 30, 2016. Article by
Shannon Farley
Digital Presence Powered by Milestone Inc.
RENT THE WHOLE LODGE!Extra privacy at a special price. Learn more »
RENT THE WHOLE LODGE!Extra privacy at a special price.
floating book nowBook Now