Guarding the King of the Jungle on the Osa Peninsula 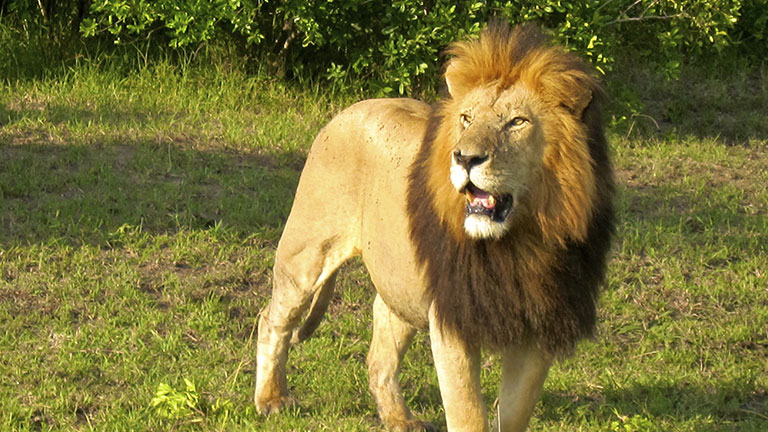 Like the lion or the tiger, the jaguar is the â€œking of the jungleâ€ in the Americas. It is the largest feline in the Americas and the third largest in the world, notes Wikipedia. With a range extending from Southwestern United States and Mexico across much of Central America and south to Paraguay and northern Argentina, there are only an estimated 15,000 jaguars left in the wild, according to the World Wildlife Fund (WWF). â€œThe jaguar is still an abundant species, but is threatened by habitat loss and persecution,â€ notes a 2008 report by the International Union for Conservation of Nature (IUCN). â€œDue to loss of habitat, poaching of prey and fragmentation of populations across portions of the range, this species is considered to be â€˜near threatened.â€™ If threats continue at the current rate, the species will likely qualify for â€˜vulnerableâ€™ status in the near future.â€ This spotted cat most closely physically resembles the leopard, although it is usually larger and stockier, and its behavior is more similar to that of the tiger. Jaguars prefer dense rainforest for their habitat, but will range across a variety of forested and open terrains; they usually stay near water, and jaguars are noted for enjoying swimming like tigers. In Costa Rica, the Osa Peninsula is an important refuge for the jaguar. The large cats roam between the vast Corcovado National Park, the biological corridor of the Golfo Dulce Forest Reserve, and the Piedras Blancas National Park. The biggest threat to the jaguar population is being killed by farmers, reported a 2011 article on jaguar conservation by the Tico Times. According to Eduardo Carrillo, biologist and director of the International Institute of Conservation and Wildlife at the National University (ICOMVIS-UNA) in Heredia, the conflict between farmers and jaguars has resulted from the loss of the wildcatsâ€™ natural prey. â€œMuch of the reason that jaguars enter farms to attack cattle is because sport hunting has diminished their principal prey and sources of food in protected areas,â€ Carrillo said. â€œPeople kill the principal prey of the jaguars and it leaves them without sufficient food. As a result, they leave the protected areas and kill cows and pigs, which results in the jaguars being killed by farmers. In Costa Rica, it is the principal cause of the decreasing population of jaguars.â€ [gallery link="file" columns="4"] Wildlife conservation groups on the Osa Peninsula are actively trying to educate farmers and landowners located near national forests on how to protect their animals while also safeguarding the jaguars. In Puerto JimÃ©nez, YaguarÃ¡ (the native word for jaguar) is a non-profit, non-governmental organization that protects wildlife, mainly wild cats. They work with the community and the National Parks system to study jaguars and ensure their survival and also for their prey throughout southern Costa Rica and northern Panama. YaguarÃ¡ is experimenting with alternative strategies, such as a farmer compensation program when a wildcat kills an animal. The organization has created an extensive network of infrared â€œcamera traps,â€ which use motion detectors to capture on film anything that passes by the camera. YaguarÃ¡â€™s scientists use the information to study the Osaâ€™s wildcat populations, especially those of ocelots, pumas and jaguars. Playa Nicuesa Rainforest Lodge, across the Golfo Dulce from the Osa Peninsula, also has installed camera traps to record wildlife activity in their 165-acre private rainforest preserve. The Playa Nicuesa Reserve borders the Piedras Blancas National Park, which connects to the Osa Peninsula and Corcovado National Park, so it is feasible that they could capture on camera the same jaguars that roam the Osa. Playa Nicuesa Rainforest Lodge is an environmentally sustainable lodge on the pristine Pacific coastline of the Golfo Dulce. The award-winning eco-lodge caters to travelers interested in ecotourism, nature and adventure. They offer family vacations, honeymoon trips, nature and adventure vacations, and yoga classes and retreats. Article by Shannon Farley
Digital Presence Powered by Milestone Inc.
RENT THE WHOLE LODGE!Extra privacy at a special price. Learn more »
RENT THE WHOLE LODGE! Extra Privacy at a Special Price
floating book nowBook Now