Why is the Osa Peninsula, Costa Rica such a favorite place to visit? 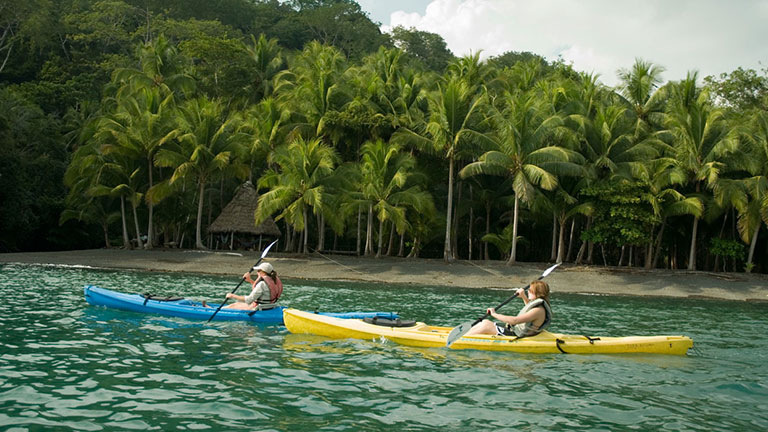 For me, the Osa Peninsula is one of the most worthwhile places to visit in Costa Rica. The small stretch of remote rugged jungle in the southwestern corner of the country, bounded by the deep blue Pacific Ocean to the west and the placid Golfo Dulce to the east, is renowned by scientists, explorers and nature lovers as an astounding paradise. Covering an area of 700 square miles, this last remaining stretch of tropical humid rainforest in Costa Rica is estimated to hold 2.5% of the world's biodiversity. The natural report card is impressive: The southern Pacific Ocean, and especially Golfo Dulce (Sweet Gulf), are vital breeding and reproducing areas for endangered hammerhead sharks and the world's migrating Pacific Humpback Whales. Activists have begun a campaign to create a â€œMultiple Use Marine Protected Areaâ€ for the waters along the entire coast of the Osa Peninsula, Costa Rica, to safeguard the abundant yet threatened marine life. The Osa Peninsula protects more than 366,000 acres of land and sea in at least 13 national parks, wildlife refuges and private reserves â€" the largest being the Golfo Dulce Forest Reserve (149,593 acres), Corcovado National Park (104,900 acres), Terraba Sierpe National Wetlands (66,850 acres), and Piedras Blancas National Park (34,642 acres). This is the spot that spawned Costa Ricaâ€™s eco-lodges and gave rise to the burgeoning industry of sustainable travel in Costa Rica. What to do on the Osa Peninsula: Where to stay by the Osa Peninsula Playa Nicuesa Rainforest Lodge is an environmentally sustainable eco-lodge by the Osa Peninsula. Its 165-acre private preserve joins with the Osa Conservation Area. The unique adventure travel destination is located on the remote inner coast of the Golfo Dulce, backed by thick jungle and the Piedras Blancas National Park. The award-winning eco-lodge offers family vacations, honeymoon trips, nature and adventure vacations, and yoga classes and retreats. Article by Shannon Farley
Digital Presence Powered by Milestone Inc.
RENT THE WHOLE LODGE!Extra privacy at a special price. Learn more »
RENT THE WHOLE LODGE!Extra privacy at a special price.
floating book nowBook Now