Posted by: Playa Nicuesa Rainforest Lodge
16 May
No 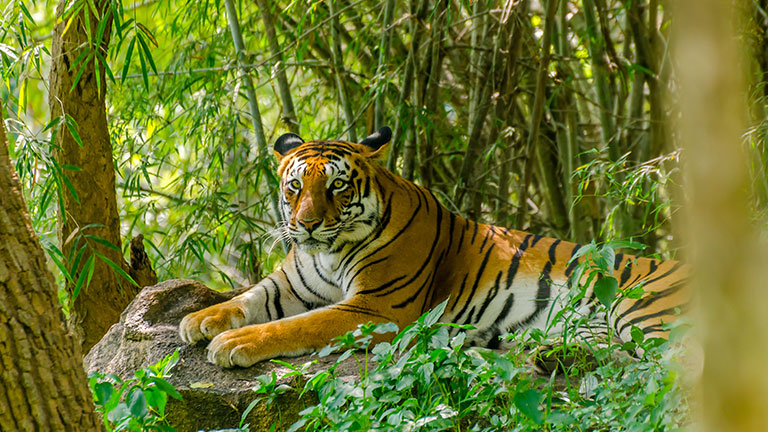 Here is the rainforest you dream to see. Down at the bottom of Costa Rica, in the very south of the country that is thankfully not on the tourism â€œsuperhighwayâ€ and explored only by adventurous intrepid travelers, lay rugged mountains, free-flowing rivers, plunging waterfalls, striking beaches and magnificent towering trees in dense rainforest. This is the wilder side of Costa Rica. A place where jaguars roam freely, scarlet macaws soar overhead, and humpback whales and dolphins frolic in the calm blue waters of the Golfo Dulce. There arenâ€™t many roads, and there are far more trees than people. In the southwestern corner of this peaceful Central American nation, renowned for eco-tourism, the Piedras Blancas National Park is much less visited than its famous neighbor, the Corcovado National Park. One third smaller, the Piedras Blancas National Park spans 34,642 acres that tie into the more than 366,000 acres of land and sea protected in national parks, wildlife refuges and private reserves on the Osa Peninsula. Sandwiched between the Golfo Dulce Forest Reserve to the west and the Golfito National Wildlife Refuge to the east, Piedras Blancas was heavily logged and hunted until land was donated or slowly bought by charitable groups and turned over for public use. The national park was created in 1993. Today, the park protects the remaining lowland tropical rainforest near the Golfo Dulce, and provides a habitat for all five species of Costa Rica wild cats â€" jaguars, ocelots, margays, jaguarundis and pumas â€" and all four kinds of monkeys â€" spider, howler, white-faced capuchin and endangered squirrel monkeys. The park is considered to be one of the better bird-watching locations in Costa Rica, with more than 330 species recorded. The best way to visit Piedras Blancas National Park is to stay in the area. Playa Nicuesa Rainforest Lodge is the top Costa Rica eco-lodge on the Golfo Dulce. Its 165-acre private preserve backs into the Piedras Blancas National Park. While visiting, you can explore thriving rainforests and immaculate beaches, powerful waterfalls and the fascinating Esquinas River and mangrove estuary. Just off the coast are many intact coral reefs, providing excellent places to snorkel and swim. Article by Shannon Farley
RENT THE WHOLE LODGE!Extra privacy at a special price. Learn more »
RENT THE WHOLE LODGE! Extra Privacy at a Special Price
floating book nowBook Now